Last night Brian had a meeting with the education board to go over his new insurance and salary. It was both exciting and a tad disheartening. Exciting because this insurance is MUCH better than what we currently have. The premiums are a bit more expensive, but the coverage is so much better. Just the fact that we won't have a $1,500 per person deductible is huge, and there are many other benefits besides that. The part that I found a little bit discouraging is the pay scale. Not that I thought teachers were going to be making big bucks or anything, and his starting salary is okay I guess, but the top salary he could ever possibly make is not much more than what he makes now - and he would only reach the top bracket after teaching for EIGHTEEN years! Believe me, it doesn't even cover inflation. Oh, well - I guess we'll just make it work, but I have a feeling that my days of being a stay at home mom are quite numbered (and I haven't started yet).

Camden's Sunday School teacher gave him a Bingo game for learning all his memory verses, and we have been playing lots of Bingo lately. After two long (and by long I mean torturous) games last night, he was doing so well reading all the numbers. He recognizes numbers by now, of course, but it's a pretty big deal for a 4 year old to be able to read numbers like 34 and 68, etc.

Yesterday as I was getting ready to walk out the door, I bent down and kissed Camden, told him bye, have a good day, love you, etc. He pulled me back down for another hug and said, "that one was just for fun, but this one is for goodbye."

So I uploaded a few parade pictures. As you go through these pictures, you'll see that this was very much a small-town parade. I think there was only one float. Most everything that came through consisted of either people riding in back of trucks throwing out candy or riding on tractors throwing out candy. Camden thoroughly enjoyed himself, though.

Who could resist this face - no
wonder he got so much candy!

Waiting for the parade to start. He couldn't
believe he was allowed to stand on the street.

I think this was the one and only float.
It's pretty funny, though.

A typical Cheatham County boy. There were lots of these tractors
in the parade. (he's in Brian's 4th grade class)

They were pelting "Mr. Lewis" with candy.

Someone from our agency is going to Korea this weekend so we prepared a little package for her to take to Rory. Unfortunately, everything we send has to fit into a gallon size freezer bag, which is not very big! We sent a blanket, two disposable cameras for the foster family to take pictures for us, a cute little smooshy toy, and a Christmas card and letter to the foster family. We're hoping they'll let Rory sleep with the blanket and then bring it home with her so she'll have something familiar to help with the transition. I wanted to send more, but I could hardly get the bag to close. I will admit to getting a little teary-eyed as I put this together last night. The picture quality isn't that great, and I'll scrap it for real someday, but for now this is all I came up with. 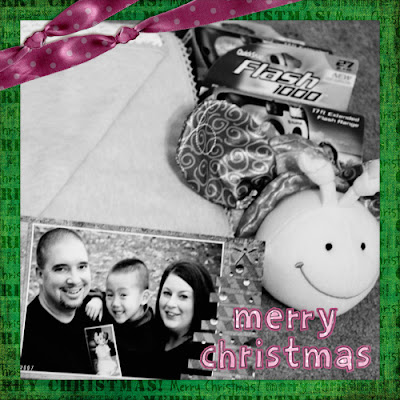 One more page using pictures of Kathy's girls and their cousins. I have to admit that I really loved scrapping in pink and brown. It's my new favorite color combination, but I don't get to use it that often! 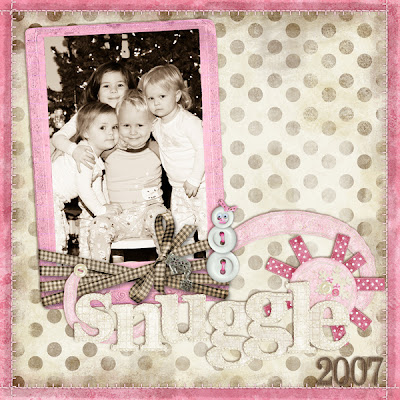