It's Good to be Home

- December 28, 2009
Did I fool you with my posts last week? :) I actually set them up prior to leaving (well, except for the poem post). We spent the last 7 days in Illinois with my parents, sister, brother-in-law, nephews, and brother. I've decided I cannot possibly edit and upload all the pictures we took (think almost 800 between Becky and I) and share them all here at once so I might just share a few at a time. I also think I'll condense the events to say that we had a really wonderful time that included lots of eating (thank heavens my mother and sister are fabulous and adventurous cooks - clearly, I did not get my lack of domestic ability from them), baking, watching the kids scream/play together, with alot of laughter mixed in. I really have just the best family. We enjoyed a Christmas Eve service (in the freezing rain), a white Christmas (plus a few extra white days after), baked cookies and then passed them out at a local nursing home on Christmas Day (which was alot of fun and also made me sad for some of the people we saw - getting old stinks), sledding with the kids along with buckets of good coffee and hot cocoa, and finally spent a quiet snowed-in day Sunday before heading home Monday. We've been home for less than 2 hours and I can already tell that the transition back to real life is not going to be easy on the kids. :) Of course, real life doesn't have to begin quite yet since Brian and Camden are both off from school for the rest of the week and we have some fun things planned (as well as alot of rest and relaxation!).

As for tonight, I plan to do nothing more than leave the suitcases where they fell when we brought them in, order pizza, put the kids in bed early and try to get more sleep than we've had the last several nights!

Camden and Rory's new super hero capes. Clearly, being a super hero calls for a strange expression since
they both immediately made these faces when they put on the capes. 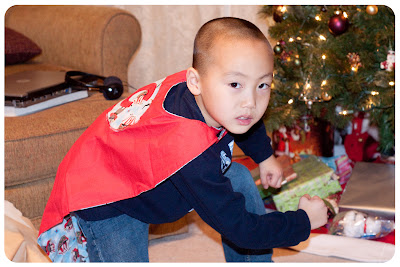 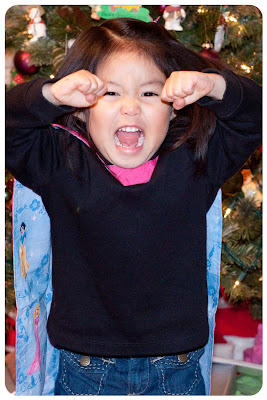 Elizabeth Frick said…
Ha! I love your little super heroes! Enjoy the rest of your week and good luck with the transitions...
7:22 PM

Christine said…
Sounds like a great time!! As tough as the transitions are going to be... I bet it is all worth it - right?!
8:39 PM

Becky said…
You are so good with all the scheduled posts! Enjoy getting some rest and fun stuff in before Brian and Camden head back to school.
9:32 PM