- December 07, 2009
Our weekend started out with date night. We thoroughly enjoyed dinner, some Christmas shopping, and the movie (although my night was nearly ruined when I realized I'm old enough to be Jacob's mother). Our child-free evening and morning went by much too quickly and we headed out at 9:00 Saturday morning for the Christmas parade. Last year Rory was terrified and spent the entire time in my lap. I was sure that things would be different this year, and for a while it seemed I was right. However, the moment the parade started, she retreated to my lap and didn't move. She's always been terrified of cars/vehicles and the fear does not seem to be abating. Camden, Brian, Gram and Gramps had fun picking up all her candy, though (while Rory and I enjoyed the warm van).

We came home for soup and sandwiches then proceeded to put up the Christmas tree. I had a game plan this year: I was going to let the kids do whatever they wanted with the tree (while I took pictures, of course) and then I'd just "fix" the tree later. They had lots of fun and I enjoyed watching them (as I tried to hide my irritation at never getting any good pics). We rounded off the evening with Chex mix and a Christmas movie. That sounds good, doesn't it? Actually, the movie started and we decided it was inappropriate and watched the Alabama/Florida football game instead. There was still Chex mix involved, of course.

Sunday we left early to drive to Illinois to attend my sister's father-in-law's funeral. While we didn't know Michael's dad well, it's so hard to see your family and those you love in pain. Camden was full of questions, of course, and we eventually told him we'd be happy to talk about everything as much as he wanted, but he had to stop with the questions during the funeral. It's a tough process to explain to a 6 year old!

We made it home in time for the kids to play for a while before bedtime while Brian headed off to a meeting, and they were seriously bouncing off the walls! Seven hours in a car plus a funeral in one day will do it to you, I guess.

Today is Brian's birthday (Happy Birthday!) and so we're going to his parent's house for supper tonight and then headed to the gym for Rory's gymnastic's class. In the meantime, I've got to put in some serious laundry and house time.

Trimming the tree pics coming tomorrow (don't be too excited - a new camera doesn't make the kids stand still for you).

The sun was a little bright as evidenced by the squinty smiles. 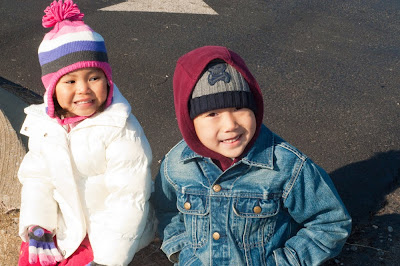 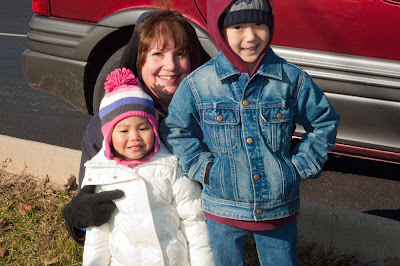 A little hot chocolate to keep us warm 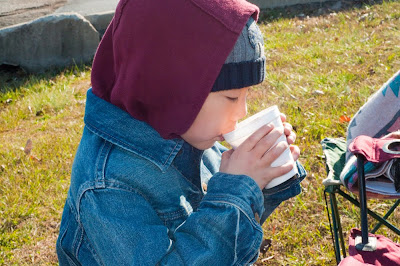 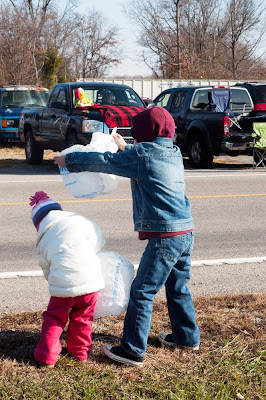 How Rory and I spent the rest of the parade 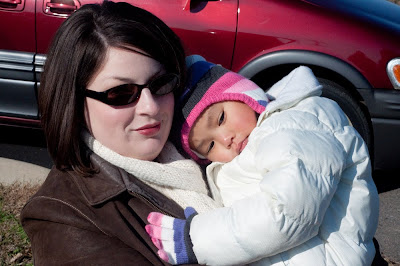 Joy said…
Happy Birthday to Brian! Hope he has a great day!

So sorry to hear about your sister's father-in-law. Hope the family is holding up as well as they can. So hard to lose someone you love.

Anonymous said…
Melissa, that is soo good of you and Rory!!!!!!!!
Happy birthday, Brian. (I sent an ecard already.)
GmaElledge
9:50 AM

Maria said…
FLAT OUT JEALOUS!! of the pictures you have from the Christmas parade. Maybe next year I won't be so sick and can go and get some pix.
7:13 PM