- July 18, 2006
Camden's birthday was Saturday as well as his party. He had a great time. Me, not so much! His two other birthdays have been such fun days. My parents have been there. My sister and her fiance (now husband) and they were just fun, fun days. Saturday - not so much. I think I was just a little bummed that my parents couldn't be there and that he is growing up so fast! His birthday also always makes me think about his birthparents and wondering where they are and how they feel on his birthday.
So anyway, my in-laws were able to be there for the first time and my sister and brother-in-law were there. Camden had a great time. Brian bought him a toy gun (I'm not thrilled about this) and he loved it! We had bought him a cool Cars backpack and lunchbox and thought he would be thrilled with it, but he only wanted to play with the gun and the $2 yardsale remote control tractor thingy Brian had found. He wanted nothing to do with any of his other gifts! We had a great ice cream cake from Coldstone Creamery, which we had to wait to eat until his Gramps could give him the dominant eye test (which he's given him many times before). He was very concerned that he has poor shooting form. Seriously.
Anyway, the grandparents left soon after and we played Nertz with Michael and Liz for like 4 hours! It was really fun.
Camden was up many times throughout the night Saturday and I was up 1:00 a.m. - 4:30 a.m. Not fun! We both stayed home from church with colds. Monday, Brian and I were both off work to have a little family day and take Camden to his 3 year doctor's appointment. He is such a good boy! As soon as Dr. Heil came in, he said, "I don't care for any shots, please." He's well ahead of development, of course, and Dr. Heil apologized for the boring 3-year visit. He said all the normal things he would discuss with parents at this visit didn't seem relative. They weighed and measured him. He is 30 lbs and 36 inches. He's only gained 2 lbs and 1.5 inches since his 2 year appointment. I couldn't believe it because he seems so much bigger! He is only 14th percentile for height and 36th for weight, but Dr. Heil said that if we were using an Asian chart, he would be on the normal side of things. Poor thing did have to get 2 shots and he acted like the nurse was cutting his leg off as soon as she walked in the room, but got over it quickly when he got his sucker. We took him to the mall playground after the doctor and he had fun playing.
My little cold has turned into a horrible sore throat and I have a doctor's appointment this afternoon. It's killing me! Hopefully, Camden and Brian will stay well since we're headed out of town.
My mom asked me yesterday if I'd done any layouts over the weekend, and I said one or two. Well, maybe a few more than that! Here they are.
LUXURY
Everything by Michelle Coleman. Mostly from her Boho Chic kit. 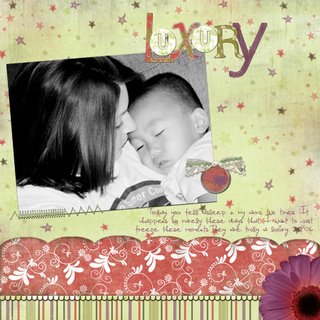 YOU ARE MY SUNSHINE
Kit is Amanda Rockwell's Lucky. Word art by Jen Wilson. 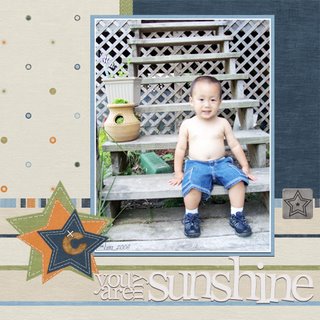 DADDY AND ME
Kit is Christy Lyle's Only You. Buttons by Jen Wilson. 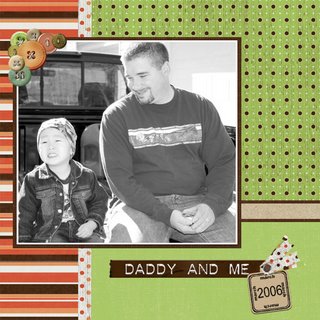 A DAY AT THE LAKE
Kit is Sunwashed Hideaway by Sara Carling and Christy Lyle.
Picture is of Brian's grandpa from last summer. 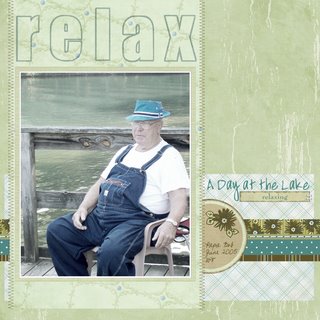