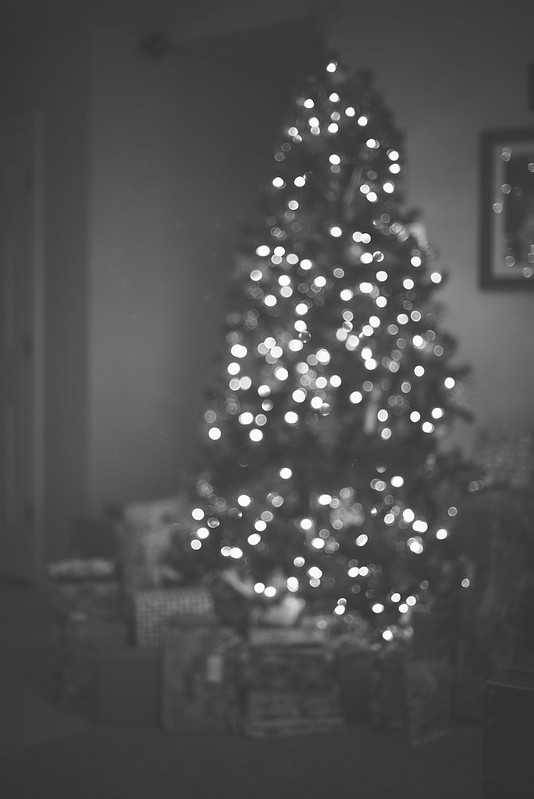 Defining Christmas of 2015 proved to be more difficult than in other years since there wasn't a clear theme, but many possible directions. 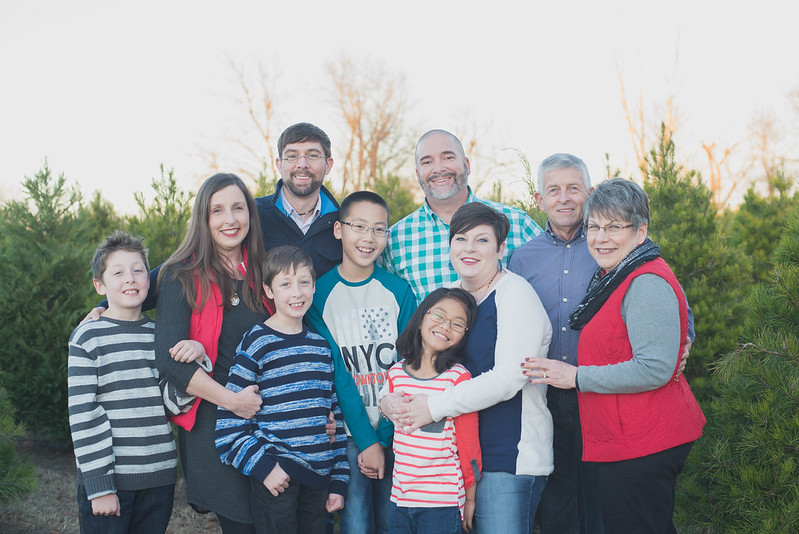 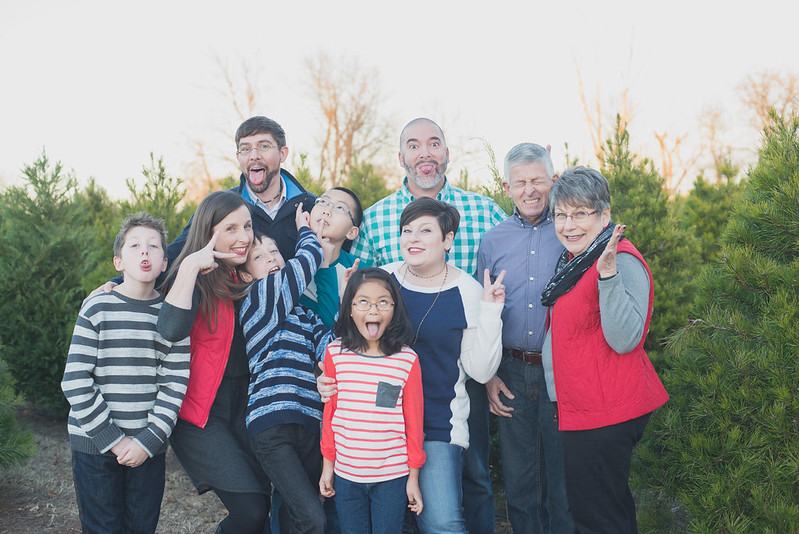 Year of the nearly broken wrist . . . Rory took a nasty fall while riding a scooter on our Christmas Eve walk and the adults were quite concerned about her crazy looking wrist. Thankfully, we still haven't had our first broken bone in the Lewis family. 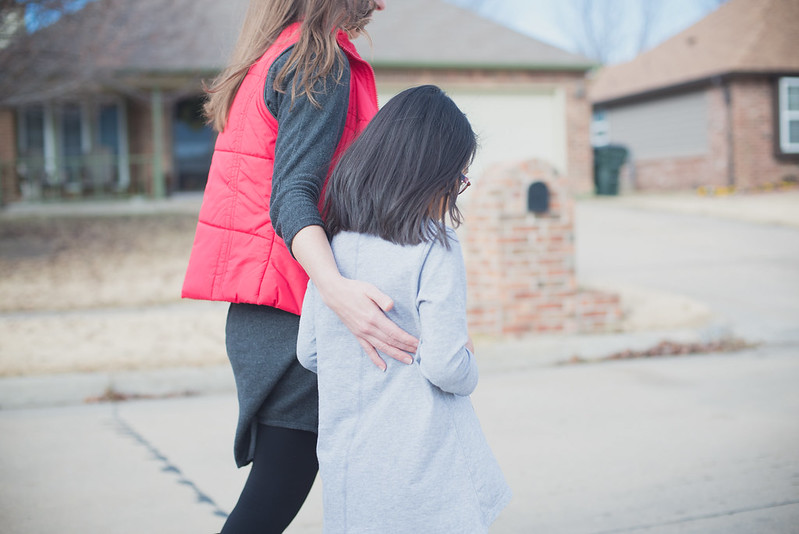 Year of the Christmas Eve trip to the hospital . . . Camden made the not-so-bright decision (at Xavier's urging) to drop a Yoda clock from the top bunk after the 3 boys had been tucked away into bed late on Christmas Eve. The clock landed on Xavier's head leaving a large knot and split eyebrow. Camden cried because he felt so bad; Xavier cried because he didn't want stitches; Rory cried because she was scared; William just piped up with, "I'm so jealous" over and over because it meant Becky, Camden, Grandpa, and Xavier got to make a trip to the ER so Dr. Micah (a.k.a. Xavier's papa) could fix him up. Xavier decided it was a "blessing in disguise" because he got to see his daddy. 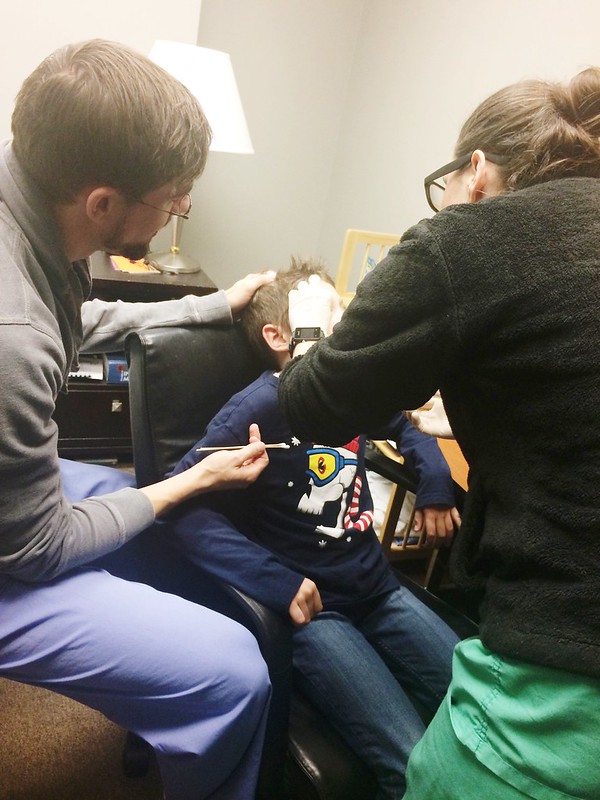 Year of the Yeti . . . this was clearly a popular gift since Becky received one from Micah, we bought one for my dad, and my dad bought one for all of the sons-in-law. 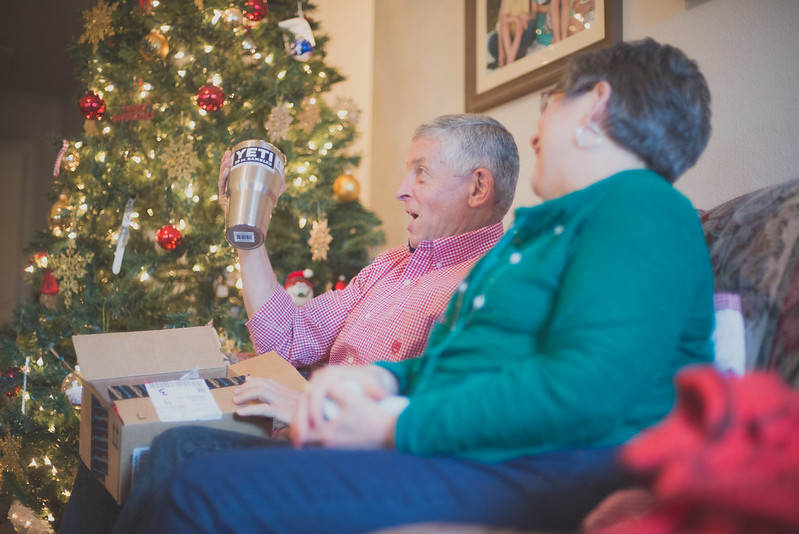 Year of the Vegetarian Christmas Dinner . . . there might have been a slight (or not-so-slight) miscalculation on cooking the turkey this year, and we ultimately decided to eat side dishes and pie for Christmas dinner. That turkey made for great turkey sandwiches the next day, though.

Year of the Bag . . . Brian surprised me with a green Kelly Moore camera bag (which has been on my wish list for years!) for Christmas. On boxing day, the girls all went shopping and came home with purses. This seems to happen when we're in Oklahoma; must be the peer pressure. Becky and I chose Patricia Nash while my mom's brand of choice was Coach.

Year of the Crud . . . that nasty sinus infection I had before our trip managed to linger through Christmas despite the strong antibiotic. Dr. Micah performed some kind of osteopathic sinus voodoo and then hooked me up with the good cough syrup. Brian seems to be having his turn now that we're back home.

Year of the Sugar . . . despite the fact that in the weeks leading up to Christmas, we (as in me, Becky, and mom) all said there was no time to bake, we ended up with an overflowing treat table. We've decided no pies next year, no birthday cake for Jesus, and we should definitely coordinate our baking . . . because nobody needs 3 different kinds of gingersnaps. 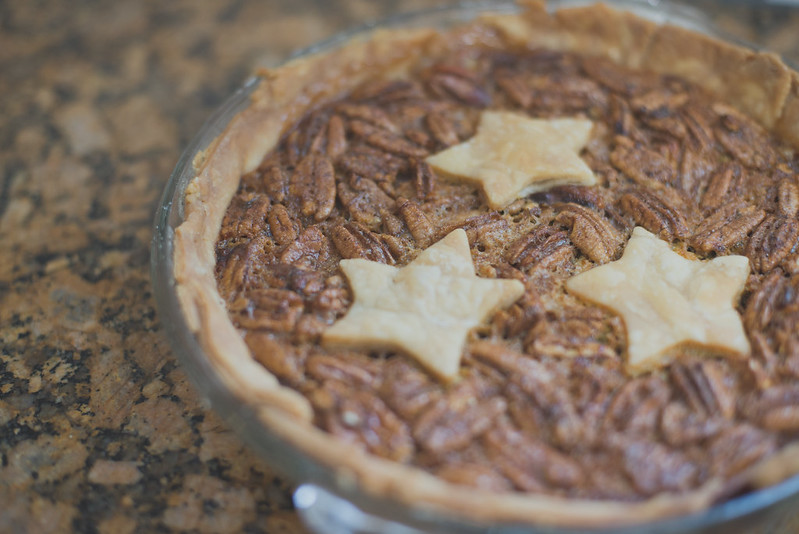 Year of the Titans . . . All of Brian's gifts from me and the kids were Titans themed. We didn't plan it necessarily, but a theme definitely emerged so we just went with it (despite their dismal season).

Year of the Coloring Book . . . all the kids along with the grown-up girls now have adult coloring books and art pencils to use. Supposed to be good for reducing stress, you know. 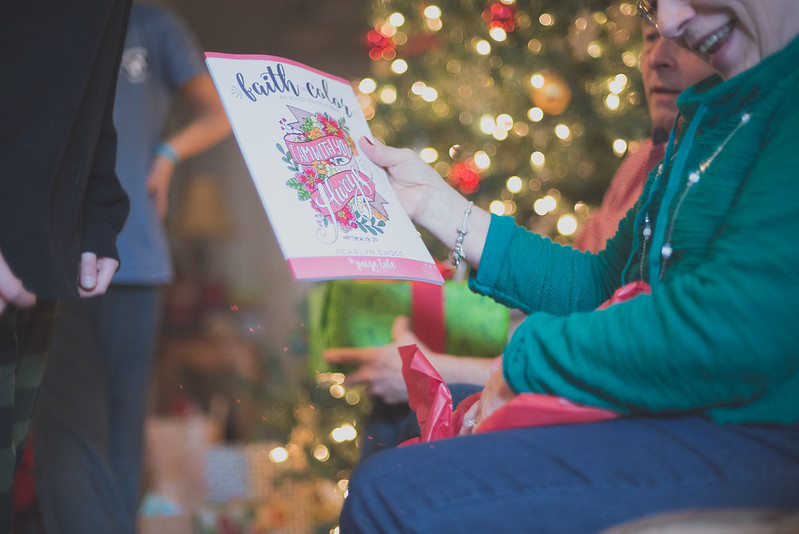 Year of the Harry Potter . . . Camden received multiple HP gifts this year, but his favorite is the HP coloring book and new illustrated HP and the Sorcerer's Stone. I hear William and Xavier have one of those coming as well. 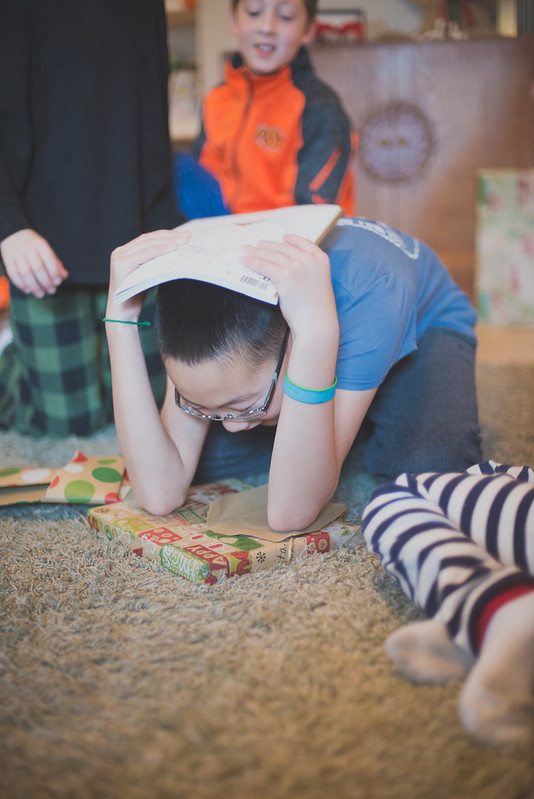 We could also declare this the Year of the Star Wars, but I am so sick of that topic, I just can't do it. I've never seen the original movies and have no desire to see the new one.

Year of the Missing Loved Ones . . . Even though we're not always all together at Christmas, I felt the missing family a little more keenly this year. Liz, Michael, and Addison couldn't travel because of Michael's work schedule. My brother stayed home, and although Micah was technically present, he was working ICU nights and could only pop in for brief periods. 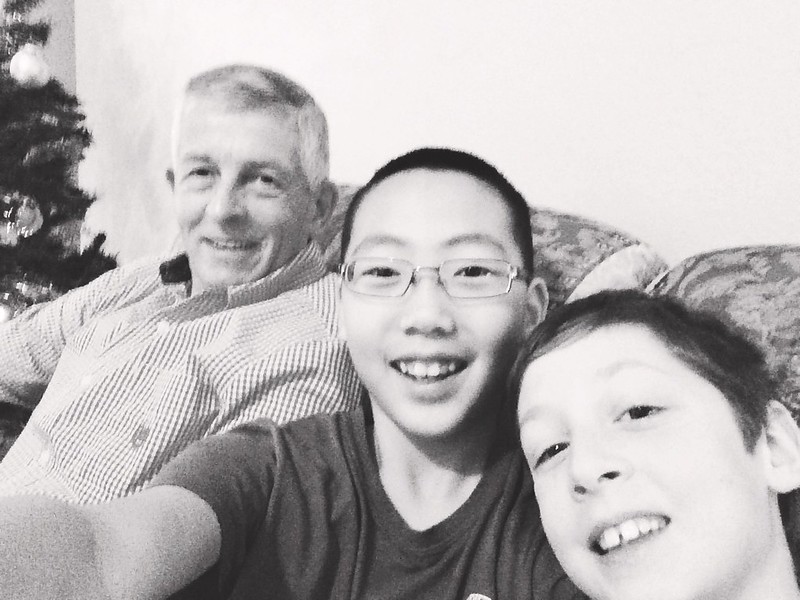 Ultimately, I decided on the Year of the Weather. From driving through incredible downpours both to and from Oklahoma, tornadoes on Christmas Eve, playing tennis in short sleeves on a sunny Christmas Day, using the air conditioning throughout the holiday, Nashville's record breaking 76 degrees on Christmas Day, and now Illinois and Oklahoma experiencing snow and ice in the days following Christmas (TN is still quite balmy), Year of the Weather seemed appropriate, if less momentous than other years. 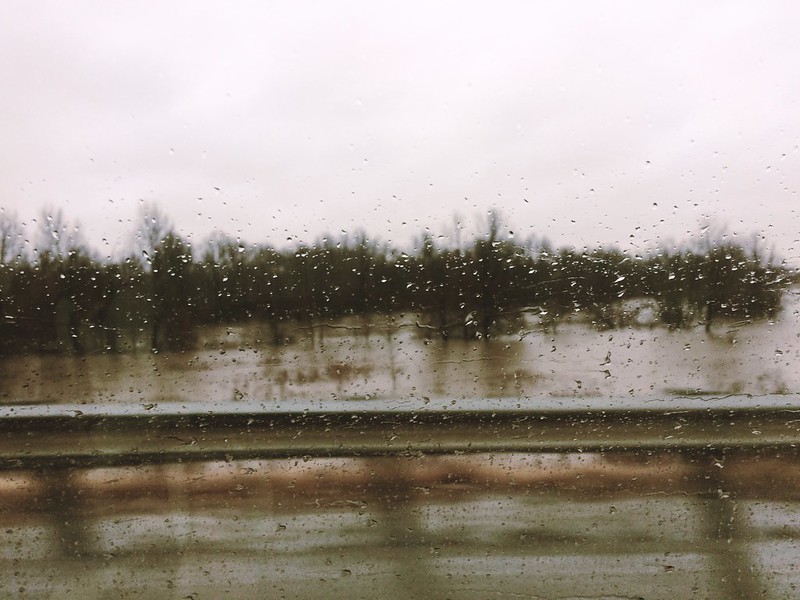 I don't have pictures of my favorite parts of Christmas 2015: reading Advent together at night, singing as many Christmas carols as we could remember in the evenings in front of the tree, watching all 4 kids sing at the top of their lungs from the front row during the Christmas Eve service, their joy at being together, the looks on the 3 boy's faces as they walked out hand in hand to tell us about Xavier's head (which was dripping with blood), the coffee and conversation, the quiet that settled on the house after the kiddos went to bed each night. 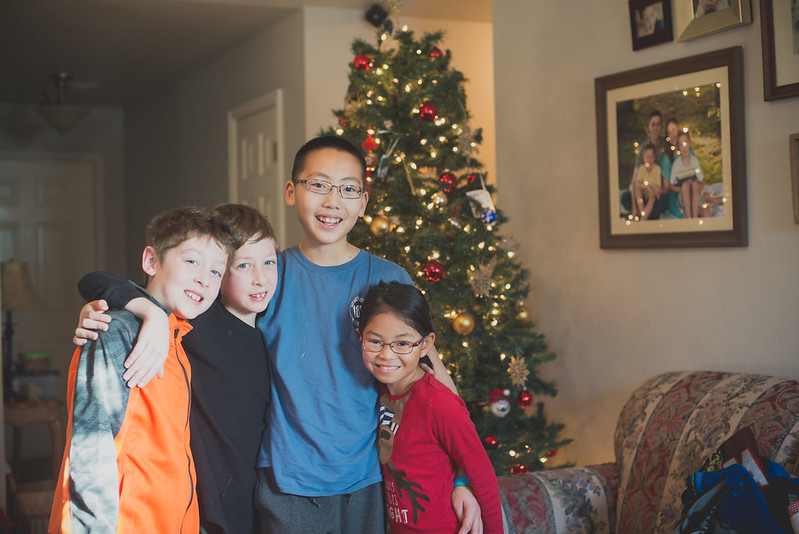 Christmas 2015 was over all too soon. We're back home and (mostly) off work this week. I'm looking forward to some reading (I've got two books ready to go), a little TV watching (started a new Korean drama last night), putting the house back together, eating something a little healthier than Christmas goodies. Brian and Camden are finally going to see Star Wars (this was all Camden asked for at Christmas), and maybe we can fit a date afternoon somewhere into the mix. Mostly, I just want a little space in the schedule this week to recuperate from the busyness of the past few months and to gear up for 2016.

Christine @ 12,450miles said…
Well, Christmas sounds... interesting for sure!! I definitely think that the weather was at the forefront for many people... good, bad, or intense. You chose well! (I laughed when I read about the bag because I thought the same thing when I read your email earlier! HA!)
7:50 PM

Melinda Troxell said…
Melissa I really enjoy reading your blog. You and your entire family are truly Blessed. I remember when your father was pastor of the Terrill Road Baptist Church in Moberly,Mo.
9:09 PM