- January 28, 2009
We were iced in yesterday and we're iced in again today. It has rained ALOT in the last 24 hours, and the temperature is now below freezing and it's changed over to snow. We don't get alot of winter weather around here! Brian is off school again today, and hopefully we won't lose our internet and cable access.

Looking out from the back door. 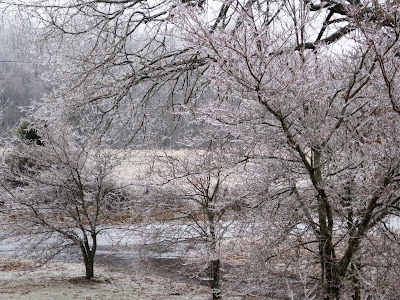 So I promised a crazy story. Remember my post a couple of weeks ago about the Walmart employee who was making comments about Camden and Rory? Well, I was at Walmart again on Monday (side note here: whatever possessed me to think I could go to the bank, Target, Kroger, Walgreens, Walmart in three different towns all in one big trip with a 2 and 5 year old in tow?). So, at Walmart again, and I actually saw that cashier and pulled out of her line! Well, I knew almost immediately that the new cashier was a goober. You know how you can just sometimes tell? The fact that he was practically hitting on the poor woman in front of me who not only had two small kids with her, but was about 16 months pregnant and was struggling with what groceries to put back because she didn't have enough money with her was my first clue. I mean, really, give her a break! So then it was our turn, and he was trying to talk to the kids and they didn't want anything to do with him. That's another clue, because Rory will pretty much smile or talk to anyone. So a few minutes into bagging the groceries, he turned to me and asked, "are they yours?" I realize many adoptive parents have gotten this question, but it was the first time for me. I answered yes and left it at that. He bagged a few more groceries, looked up, and said in a completely deadpan voice, "I guess I just don't see the resemblance." My blood pressure immediately shot up, but I replied that they were born in Korea in a fairly kind, but firm voice. What I really wanted to say was "seriously??"


I basically ignored him the rest of the shopping trip. Camden, was hanging out right at my elbow as usual (despite my insistence that he move). This is how he gets hit in the head with the canned grocieres on a fairly regular basis - he moves back up to my elbow while I've turned to pick up the groceries. I made him move back beside Rory, who was sitting in the cart, and told him to keep his hands to himself (because we all know how possessive Rory is of anything she's touching.). Of course, he doesn't listen and starts messing with the cart which leads to screams and whining from Rory. She is trying with all her might to pry Camden's fingers off the cart and completely ignoring my instructions to leave him alone. I finally reached over and tugged at the shoulder of her jacket. She looked over her shoulder, gave me a completely evil look, and proceeded to yell, "oooooowwwwwwww!" Can I just mention she has NEVER verbalized "ow" before! She then started fake sobbing and looking at me like I have just pinched the fire out of her, and for the record, I only tugged on her jacket!! It went on and on and on. I have a feeling that life with this drama queen is not going to be easy. We finally made it out to the car and she stopped fake crying after I threatened her within an inch of her life. As I tried to talk to her about how ugly it is to scream at Camden, she hooked her arm around my neck, leaned in and placed her cheek against mine and squeezed. Have I mentioned this is her new tactic when she's in trouble?

So, anyway, all that to say I may never shop at Walmart again! :) 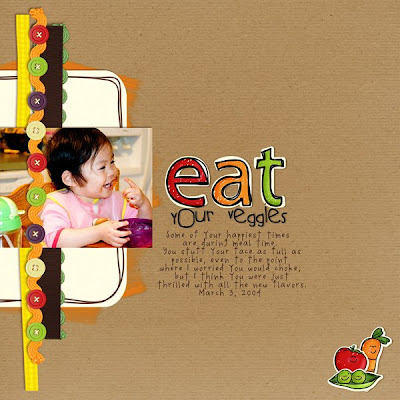