- January 07, 2008
This week marks a new start for me. Maybe someone out there in blogland can keep me accountable. Starting with last evening, there are two things that must be done before my head hits the pillow: (1) the kitchen and living room completely ready for a new day, and (2) my devotions finished. These seem to be the two things that are easiest for me to put off for some reason, so I am committing to making sure those two things are done. I’m also starting a sugar-free week. That means absolutely no sugar. Well, except for fruit since my husband reminded me that fruit does have natural sugar. I’m feeling pretty strong, but hey, it’s only Monday morning.


Camden spent a couple of hours with his Gram and Gramps on Friday so Brian and I ran some errands, got the car mirror fixed and went to see I Am Legend. It was in a word: SCARY. We both really enjoyed it, though. And since it’s scary in an unrealistic, alien kind of way, I’m okay with it. I’m not okay with anything scary that is realistic.

Friday night we took to the birthday party at Go Jump, and he had a blast. I even managed to make my way onto a couple of the big bouncy things.

Saturday was pretty slow. Well, slow in the way of entertainment. Not really slow when I think about the SIX loads of laundry, I washed, folded, and put away.

Sunday Camden woke up sick. I’m still not really sure if he just had a touch of the stomach flu or what. He never threw up, but was very pale and shaky and pretty pitiful. He also had the chills for a while. The two of us stayed on the couch until almost 11:00, and then he ate a piece of toast and napped for 2 hours. By late afternoon/early evening he was feeling quite a bit better, but I kept him home from church and put him in bed early. He starts back to school today after more than 2 weeks off (as does Brian) so I wanted to make sure he was going to be feeling well. He was so funny because he kept telling me he was seasick!

That about wraps it up! Here’s a page I finished using a picture from this year’s church Christmas program. 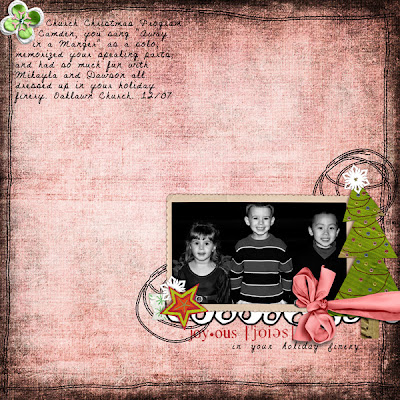